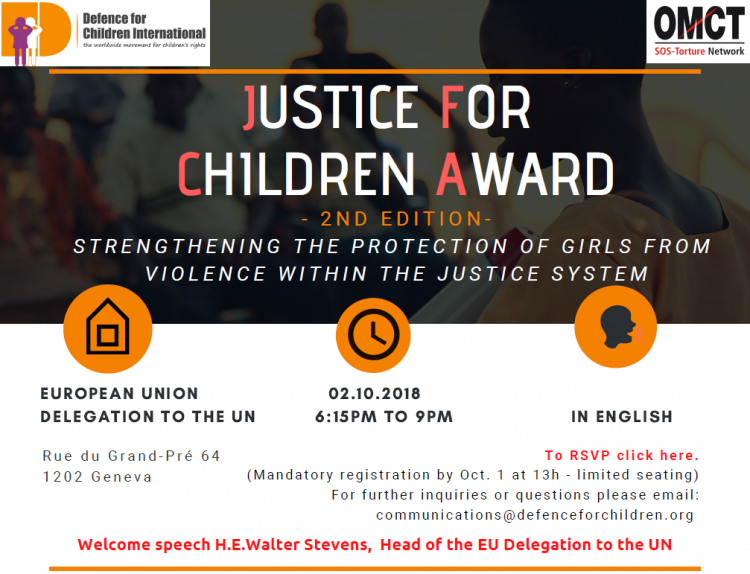 Strengthening the protection of girls from violence within the justice systems.

Subtitle: Strengthening the protection of girls from violence within the justice system

Language: English – No interpretation will be provided

Organizers: Defence for Children International (DCI) and the World Organization Against Torture (OMCT).

Co-sponsors: EU Delegation and La Loterie Romande and with the Support of la Ville de Genève

The Justice for Children Award is a competition organized by Defence for Children International (DCI) and the World Organization Against Torture (OMCT). The aim of this competition is to encourage academic research within European Universities on the obstacles and challenges that compromise the realization of children’s rights in justice systems. The second edition of this competition aimed at advancing knowledge on how to prevent and protect violence against girls within the justice systems.

Mr. Filip Waszczuk, a  second-year Master’s student in Human Rights and Humanitarian Action at Sciences Po Paris, France, won the second edition of this prize in 2017 with his article “No Blame For Being Vulnerable: Access To Justice Of Disabled Girls In Uganda On The Example Of Sexual Violence”. His article addresses the intersectionality of discrimination girls with disabilities face when they come into contact with the justice system in Uganda.

The purpose of this side event is to award the winner of the prize, Mr. Waszczuk, and take the opportunity to facilitate a discussion with different stakeholders – international non-governmental organisations (INGOs), States, members of the United Nations Committee of the Rights of the Child, and academia – on how to ensure equal and fair access to justice for girls whether they are victims seeking redress, victims treated as criminals, or alleged and/or convicted offenders; how to protect their right to be free from violence while in contact with the justice system; and to explore what can be learnt from existing good practices at the national level.

Every day, around the world, girls are exposed to violence and violations of their human rights as a result of their lack of status in society due to both their age and gender. Other factors such as ethnicity or disability only reinforce girls’ vulnerability and can create intersecting forms of discrimination. Deeply-rooted discriminatory attitudes and practices continue to fuel acts of gender-based violence against girls and to influence responses by the justice system. These systems often fail to provide girls, either as victims seeking justice or as alleged and/or convicted offenders, with equal and adequate access to justice, protection, reparation, and redress, rather furthering violence against them.[1]

When accessing justice, girls face significant barriers. Legislation and criminal, administrative and civil proceedings often do not adequately safeguard the rights of girls who enter the justice system, while relevant institutions are seldom well-equipped to properly deal with girls’ specific vulnerabilities and needs. Moreover, girls seeking redress through judicial means, as well as alleged and/or convicted offenders, can face intimidating situations, from the fear of stigmatization and retaliation to intimidation, harassment, and abuse.

In some cases, girls are even deprived of liberty for “so-called” preventive reasons and/or charged as perpetrators of crimes, which lead to silencing and lack of accountability for those crimes. In spite of a lack of global disaggregated data on girls deprived of liberty worldwide, recent reports show that an increasing number of girls are deprived of their liberty, often arbitrarily, and unnecessarily, and in contravention with article 37 b) of the UN Convention on the Rights of the Child, which obliges States parties to deprive children of their liberty only as a measure of last resort, and only for the shortest appropriate period of time.

According to the fourth edition of the World Female Imprisonment List, as of September 2017 more than 714,000 women and girls were held in penal institutions throughout the world.[2] While girls represent a small proportion of the overall population of detainees, girls deprived of their liberty are one of the most vulnerable groups.

Many countries fail to make special arrangements or provide separate facilities to them, in contradiction with the principle of non-discrimination and United Nations Rules for the Treatment of Women Prisoners and Non-custodial Measures for Women Offenders (“the Bangkok Rules”). In detention, girls are often subjected to bad conditions of confinement in unsuited environments where incidences of violence, including torture and other cruel, inhuman and degrading treatments, are particularly high putting them at risk. As noted by the former UN Special Rapporteur on torture and other cruel, inhuman and degrading treatment or punishment, Manfred Nowak, custodial violence against girls “very often includes rape and other forms of sexual violence such as threats of rape, virginity testing, being stripped naked, invasive body searches, insults and humiliations of sexual nature”.[3]

Overall, direct and indirect forms of violence that occur within the justice system put the protection of the rights and dignity of girls at risk, while measures that should be taken in their best interests are often absent. Girls continue to face a “double” challenge when they come in contact with justice systems; the reasons for this are rooted in discriminatory attitudes and perceptions which are still common worldwide. In many countries, there is still a lack of specialized judges, law enforcement officers, lawyers, police officers, trained to work with girls and to take into account their specific needs.  Removing barriers to access justice, putting measures in place to avoid stigmatization and (re) victimization of girls, as well as ensuring the implementation of restorative justice approaches and other key principles of the “Bangkok Rules” are key priorities that currently remain a work in progress.

Finally, a number of the Sustainable Development Goals (SDG) are relevant for the matter at hand. SDG number 5: “Achieve gender equality and empower all women and girls” includes among other targets: (i) End all forms of discrimination against all women and girls everywhere; and (ii) eliminate all forms of violence against all women and girls in the public and private spheres, including trafficking and sexual and other types of exploitation. SDG 16 – focused on peace, justice and strong institutions – includes a specific target to “end abuse, exploitation, trafficking and all forms of violence against and torture of children.” If we want to collectively achieve these targets by 2030 and “leave no one behind,” we must place key issues such as the protection of girls from violence within the justice systems at the forefront of the discussion. We will then generate the much-needed dialogue between different stakeholders to identify the scale of the problem and address the issue through the implementation of effective measures at the international, regional, and national levels.

[1] Office of the Special Representative of the Secretary-General on Violence against Children, Safeguarding the rights of girls in the criminal justice system: Preventing violence, stigmatisation and deprivation of liberty, New York, 2015