NEW YORK, March 17, 2021 — The United Nations’ efforts to hold warring parties accountable for grave violations against children is at risk of being “significantly and permanently weakened,” a group of independent experts said in a report released today. The Eminent Persons Group identified dozens of cases in which armed forces or groups responsible for repeated and serious violations against children in war were omitted or removed too early from the secretary-general’s annual list of perpetrators.

The experts found that between 2010 and 2020, at least eight parties to conflicts—including six government forces—were found responsible for killing and maiming more than 100 children in a single year, but were not listed. For example, the Afghan National Defense and Security Forces were responsible for killing or maiming 4,046 children between 2014 and 2020, according to UN data, but have never appeared on the list for that violation.

“Our analysis found alarming inconsistencies behind decisions about which perpetrators to list in the UN’s annual reports on children and armed conflict and when to remove them from the list,” said Yanghee Lee, former chair of the Committee on the Rights of the Child and former UN special rapporteur on the situation of human rights in Myanmar. 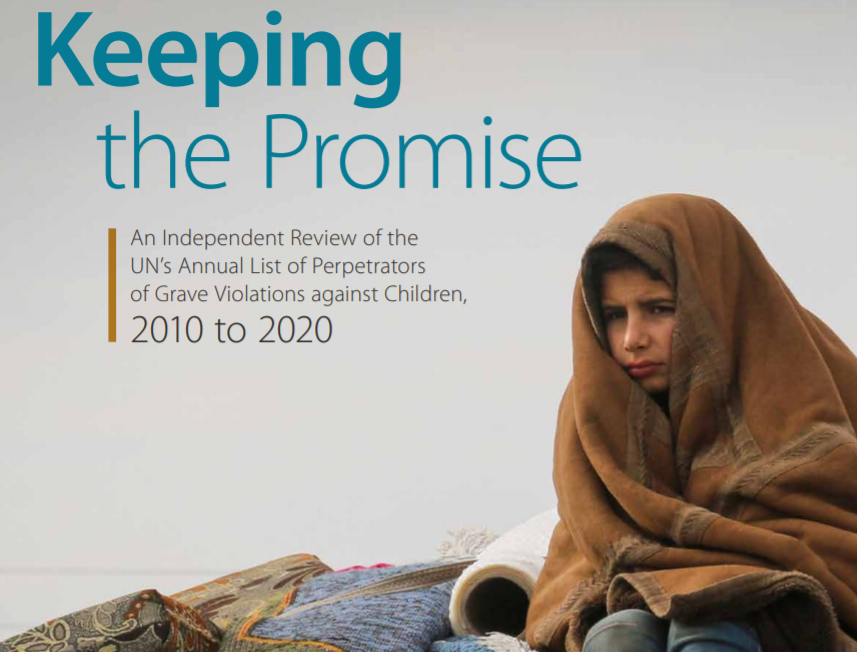 “We are calling on the secretary-general to urgently address these problems and commit to hold all countries and groups responsible for violations against children accountable without fear or favor.”

Former UN force commander and founder of the Dallaire Institute for Children, Peace, and Security, Lieutenant-General Roméo Dallaire agreed: “Our aim with this report is to reinforce the work of the special representative for children and armed conflict, and assist in ensuring these critical instruments of prevention and protection are utilized effectively, efficiently, and uniformly, without political interference. Fulfilling our promise to children also demands greater investments in monitoring and early warning systems.”

The experts emphasized that existing mechanisms to protect children in conflict have had great impact, underscoring why it is critical to maintain the Security Council’s carefully built framework as envisioned. The secretary-general’s annual “list of shame,” UN documentation of violations against children, and engagement with warring parties has led to the adoption of more than 30 action plans to end violations by parties in conflict and the release of more than 150,000 children from armed forces and groups.
The Eminent Persons Group identified three instances where parties were prematurely removed from the list despite continuing violations: the 2018 removal of the Saudi-led coalition for attacks on schools and hospitals in Yemen; the 2020 removal of the Saudi-led coalition for killing and maiming children in Yemen; and the 2020 removal of the Myanmar Armed Forces (Tatmadaw Kyi) for recruitment and use of children in Myanmar.
The 37-page analysis also uncovered serious discrepancies in the secretary-general’s listing decisions, often favoring government forces. For example, in Somalia, Al-Shabaab has been listed for rape and sexual violence, but the Somali National Army has not been listed, despite comparable—and in some years, even higher numbers—of rape and sexual violence cases.
The Eminent Persons Group, which was convened by the Watchlist on Children and Armed Conflict, is comprised of international children’s rights experts, including Lieutenant-General Roméo Dallaire (Ret’d), former force commander of the UN Assistance Mission for Rwanda during the 1994 genocide and founder of the Dallaire Institute for Children, Peace and Security; Yanghee Lee, former chair of the Committee on the Rights of the Child and former UN special rapporteur on the situation of human rights in Myanmar; Benyam Dawit Mezmur, former special rapporteur on children and armed conflict for the African Committee of Experts on the Rights and Welfare of the Child and law professor at the University of the Western Cape; and Allan Rock, former permanent representative of Canada to the UN and former chair of the UN “Group of Friends” on children and armed conflict. The analysis includes recommendations for the secretary-general, UN member states, as well as several UN bodies and agencies focusing on children in conflict.

Quotes attributable to members of the Eminent Persons Group:

“The UN has invested significant attention, resources, and expertise in protecting children suffering the consequences of armed conflict. Now it must ensure that the list of perpetrators it issues is more credible, accurate, complete, and evidence-based, or risk pulling apart this unique tool for the protection of children caught in war.”

“By prematurely removing parties from the annual ‘list of shame’ or using double standards for different child rights violators, the UN loses an important leverage tool to incentivize changes in behavior. The secretary-general’s decision to remove the Tatmadaw from his list for recruiting and using children in its ranks is a prime example. Child recruitment by Myanmar’s military has not only continued, but increased since it was removed from the list.”

“The UN’s double standards in how it treats those responsible for egregious violations against children will only put children further at risk. It incentivizes violators to play politics, rather than undertaking good faith efforts to end grave violations of children’s rights. We must hold parties accountable based on the facts of their conduct, not their political influence.”

Lieutenant-General Roméo Dallaire (Ret’d): “Governments and the whole of the UN system must rise above politics when it comes to the protection of children, who are among the most vulnerable in armed conflict. Holding all perpetrators accountable is critical for protecting children in war and creating lasting conditions for peace, security, and stability.”