Breakthrough moment for children to claim their human rights

The Optional Protocol to the Convention on the Rights of the Child on a Communications Procedure (OP3 CRC) enters into force today, 14 April 2014. Following the ratification of the Optional Protocol by ten countries: Albania, Bolivia, Gabon, Germany, Montenegro, Portugal, Spain, Thailand, Slovakia and Costa Rica, children now have the possibility to lodge complaints directly to the United Nations about violations of their human rights.

Despite 25 years having passed since the United Nations Convention of the Rights of the Child was adopted, children still suffer human rights violations all over the world as they face abuse, exploitation, violence, even the death penalty. Starting from today, the UN Convention on the Rights of the Child will be strengthened by this new complaint mechanism allowing children to claim justice as full right bearers. In case no solution for violation of children’s rights is found nationally, victims will now be able to seek justice on the international level. However, this will only be possible if the government of a victim has ratified the Optional Protocol on a Communications Procedure, and if all legal avenues in the victim’s own country have been exhausted.

Learn more about the OP and how to ratify it in your country: http://ratifyop3crc.org/

A child-friendly version of the Optional Protocol to the Convention on the Rights of the Child on a Complaints Procedure is available at the following website: http://srsg.violenceagainstchildren.org/sites/default/files/cropped_images/RaisingUnderstanding_OCPC.pdf

We call for a Global Study on Children Deprived of Liberty to be carried out as there is a clear lack of quantitative and qualitative data (particularly disaggregated data), research and verified information on the situation of children deprived of their liberty worldwide.

Despite the fact that article 37 (b) of the United Nations Convention on the Rights of the Child states that: “deprivation of liberty should be a measure of last resort and for the shortest appropriate period of time“, children are all too often deprived of their liberty, being exposed to increased risks of abuse, violence, acute social discrimination and denial of their civil, political, economic, social and cultural rights.

This Study would aim to map out – through monitoring and evaluation analysis – how existing international laws and standards are being implemented on the ground and assess the concrete possibilities for States to improve their policies and responses. Through the collection of sound evidence and reliable data, the Study would also provide a consolidation of good practices and the formulation of recommendations in order to support the work of States, UN agencies and other stakeholders to more effectively implement international standards and ensure that children deprived of their liberty have their human rights respected.
More info about the launch of the Campaign
Read the official Call for a Global Study in EN | FR | ES | AR
See the brochure 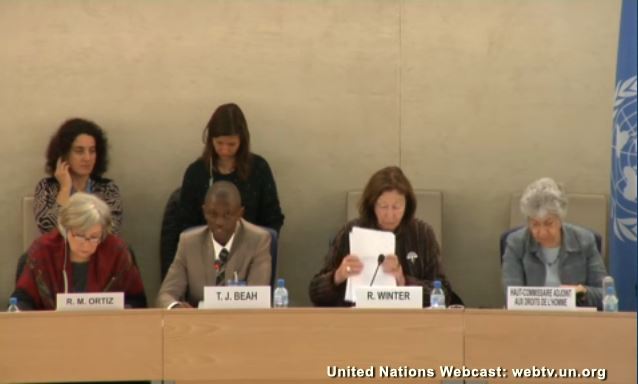 In the course of its 25th regular session, the Human Rights Council (HRC) held its annual full-day meeting on the rights of the child (ADRC) dedicated this year to the specific theme of access to justice for children.
The morning session of the ADRC discussed international norms and standards on access to justice for children and child-sensitive justice. Panellists to take part in the discussion included: UN Deputy High Commissioner for Human Rights, Ms. Flavia Pansieri; Head of the Permanent Delegation of the European Union to the UN Office at Geneva, Ms. Mariangela Zappia; Regional Director for Central and Eastern Europe and the Commonwealth of the Independent States of United Nations Children Fund, Ms. Marie-Pierre Poirier; Committee on the Rights of the Child member, Ms. Renate Winter; Vice-President and Rapporteur on the Rights of the Child, Inter-American Commission of Human Rights, Ms. Rosa Maria Ortiz; the Special Representative of the Secretary-General on Violence against Children, Ms. Marta Santos Pais. DCI was represented on the Panel by Mr. Tom Julius Beah from DCI – Sierra Leone.
Read the full Press Release