Israeli paramilitary border police forces raided DCIP’s headquarters located in Al-Bireh’s Sateh Marhaba neighborhood, located just south of Ramallah around 5:15 a.m. on July 29. More than a dozen Israeli soldiers forced open the office’s locked front door and confiscated six desktop computers, two laptops, hard drives, and client files related to Palestinian child detainees represented by DCIP’s lawyers in Israel’s military courts. No documents were left in the office to give any indication of the reason for the raid, and they did not leave behind any receipt of materials seized.

Video surveillance footage from inside the DCIP office shows Israeli forces entering the premises at 5:15 a.m. The Israeli soldiers move through the DCIP office gathering computers, laptops, and files, and then cut the closed-circuit television camera feed at 5:27 a.m.

Israeli, Palestinian, and international human rights and humanitarian organizations face an increasingly difficult operating environment and shrinking civic space in Israel and the occupied West Bank, including East Jerusalem, and the Gaza Strip. Recent attempts to delegitimize humanitarian and human rights organizations operating in the Occupied Palestinian Territory, in particular, have been on the rise in recent years, negatively impacting their ability to deliver assistance and advocate on behalf of Palestinian human rights.

Delegitimization attempts and disinformation have been advanced by a network of rising nationalist Israeli civil society organizations and associated organizations elsewhere, with the support of the Israeli Ministry of Foreign Affairs. These efforts take the form of targeted and organized defamation campaigns based on a range of allegations related to the violation of counter-terrorism legislation and international law. In most cases, if not all, these allegations are erroneous, misrepresent, and distort critical factual or legal elements.

In February 2020, following a defamation campaign waged by Israeli officials and right-wing organizations, the Government of Belgium effectively rescinded its invitation to Brad Parker, DCIP’s senior adviser for policy and advocacy, to address the UN Security Council. Parker had been invited to brief Security Council members on violations of children’s rights in Israel and the Occupied Palestinian Territory.

In June 2019, DCIP, represented by Bindmans LLP, issued libel proceedings against the U.K.-based group UK Lawyers for Israel (UKLFI) in London at the High Court of Justice for publishing blog posts on their website and sending letters to institutional donors alleging DCIP had strong “links” to a designated terrorist group. UKLFI alleged that “donations to DCIP have encouraged and/or facilitated acts of terrorism” and threatened to report donors to relevant authorities if they did not cease providing DCIP with financial support. In March 2020, DCIP reached a settlement in its defamation case in which UKLFI recanted allegations that DCIP provides support to terrorist organizations.

DCIP is an independent, local Palestinian child rights organization dedicated to defending and promoting the rights of children living in the West Bank, including East Jerusalem, and the Gaza Strip. For 30 years, DCIP has investigated, documented, and exposed grave human rights violations against Palestinian children; provided legal services to children in urgent need; held Israeli and Palestinian authorities accountable to universal human rights principles; and advocated at the international and national levels to advance access to justice and protection for children.

DCIP passes all international and rigorous financial and due diligence vetting mechanisms, including checking information against banking, law enforcement, and US Department of Treasury Office of Foreign Asset Control (OFAC) watchlists. DCIP is vetted and supported by various international, regional, and national institutions and government partners and donors. All DCIP programming, including monitoring and documentation work and evidence-based output, remains independent and strictly based on international human rights law and international humanitarian law.

“As the Israeli government becomes increasingly emboldened and acts to criminalize legitimate human rights and humanitarian work carried out by Palestinian human rights and civil society organizations, I am deeply concerned that politically motivated prosecutions in Israel’s military court system will become the norm,” Quzmar said. 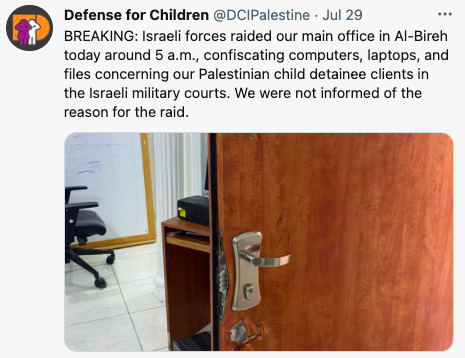 READ the press release by DCI-Palestine in their website HERE