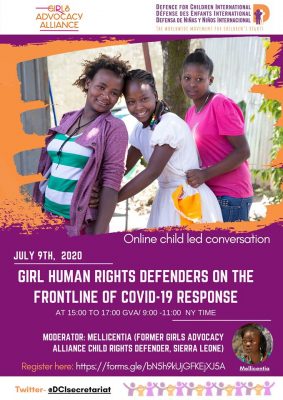 While COVID-19 is having a disproportionate impact on girls, we have to recognise their unique power to stop the virus. An effective response to the pandemic means tackling the violence and inequality faced by girls.

On July 9, alongside the Human Rights Council 44th session and the High-Level Political Forum, six girl human rights defenders called up on the United Nations and its Member States to ensure the participation of children and youth in the COVID-19 response and beyond during an online child-led conversation on States’ response to the COVID-19 pandemic. This Webinar was organised by Defence for Children International (DCI) together with the Girls Advocacy Alliance (GAA), and was moderated by the Sierra Leonean child rights defender, Mellicentia.

Over recent weeks, there has been a dramatic jump in reported incidences of domestic violence and unintended pregnancies in many countries, as security, health, and financial worries create tensions and strains accentuated by the cramped living conditions of lockdown. Although the UN has set a 2030 deadline to achieve the Sustainable Development Goals, girl human rights defenders claim that seems unlikely.

Women and girls have inspired and led mass mobilizations and collective action across the world. Defence for Children International together with partners from the Girls Advocacy Alliance has alerted the United Nations Human Rights Committee by providing inputs to he Draft General Comment 37 on the Right to Peaceful Assembly, and the upcoming thematic report of the UN Special Rapporteur on the Rights to Freedom of Peaceful Assembly and Association on the age, gender and diversity aspects of the rights to speak out freely and protest.

DCI and the GAA thought it was interesting to give the floor to six girl human rights defenders, sharing their views, experience and challenges focusing on the Covid-19 pandemic and beyond.

The event was opened by Aoife Fleming and Hajar Yagkoubi, the Dutch youth representatives to the United Nations on Sustainable Development and Human Rights and Security, who in the context of the High-Level Political Forum sent a message to the GAA. They highlighted the importance to respond to COVID-19 and other crisis, including climate change, affect the lives of children. Applauding the realisation of the event, they also emphasised the right of young people to be heard as well as the fundamental role of youth participation in multilateral decision-making processes: “There is still a long way to go for the voice of young people if treated equally to that of other generations. Today’s decisions, whether in national politics or in a local village or school, have an impact on the young generation. Youth are the largest stakeholder in the future that we’re creating today, and we also have the right to be heard. That is why it is important that our voices are heard. ” – Hajar

The first speaker in the Webinar was Memory Banda, who is a Malawian children’s right defender known for her activism against child marriage. She expressed her concern on how the pandemic has affected girls and young women’s rights, especially given the increase of domestic violence in this context and the lack of adequate sexual and reproductive health services to ensure the protection of girls and young women’s sexual and reproductive health and rights. Memory regretted the closure of schools in Malawi and the consequent lack of support to children, which may compromise the achievement of the 2030 Sustainable Development Goals in Malawi. For her, “world leaders must not only tackle the root causes of gender inequality” but also “listen to the voices of young people who are on the frontlines of defending justice.”

Maria, a 17-year-old Scottish young advisor for the Children and Young people’s Commissioner for Scotland, focused on the importance of mental health during situations of crisis like the pandemic. She noted with concern that, during this crisis, most mental health services went online or even halted, which has disrupted many young people. For Maria, “mental health is such an important topic as it affects every single person in every aspect of their life, but it is still widely stigmatised.”

Furthermore, Paul a youth advocate from Ghana noted the fact that in his country as a result of the COVID-19 pandemic young girls and boys are being disproportionally affected by different forms of violence including sexual violence both offline and online, child marriage, domestic violence, and female genital mutilation. He emphasised the danger that lockdowns represent for girls and called for the investigation of cases and justice for all children who have been victims of gender-based violence during the pandemic.

The 16-year-old Scottish activist, Hope, described the challenges faced by girls who, like herself, live in rural areas. According to her, empowering young people to speak up can have a positive impact on public policies, which is reflected in some good practices recently implemented in Scotland. Addressing those who work with children, she said, “next time you are about to make a decision, ask a young person. It is not enough to only think what young people think about this, but instead, ask them.”

Miatta, 15, is a Liberian girl advocate involved who works to promote the rights of girls and young women. “The issue of violence has increased in this pandemic, during which many girls have been abused by closed relatives during the lockdown”. Miatta also narrated the difficult experiences and stigma that different girls have gone through after having suffered sexual and gender-based violence in Liberia. Finally, she also raised the issue of child marriage, which she notes is sometimes a way-out for families facing financial difficulties.

Regarding young offenders and children in contact with the law, Beccie (from Scotland) noted that their rights have been compromised in the context of the COVID19 pandemic. Whereas in England criminal and administrative law measures for tackling the virus affected only persons aged 18-year-old over, in Scotland, they affected everyone aged 16-year-old over, she said. Beccie explained how young advisers successfully advocated for changing this reality by pushing for the raising of minimum age to 18. She also highlighted that they have pushed for the Scottish police to take a rights-based approach while interacting with children, including through the protection of their mental health and the prevention of traumatic situations.

Throughout the Webinar, the moderator Mellicentia stressed the importance of safe spaces for girls and young women who may be victims of gender-based violence. She noted that, while Sierra Leone has undertaken various policies to protect children’s rights, the pandemic has compromised the full realisation of these rights given the closure of schools. In her words, “education is crucial for girls who have been subjected to sexual and gender-based violence since it gives them the opportunity to move on and plan for the future. 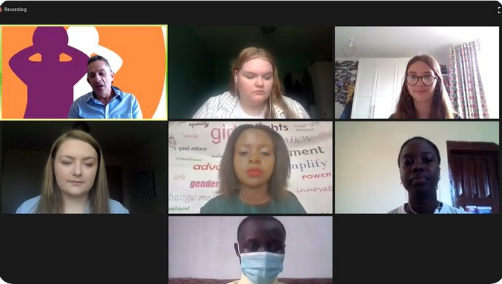