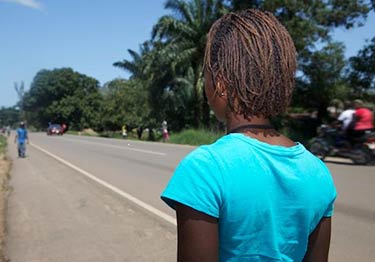 Freetown, Sierra Leone, February 5th 2021 – In a succinct and powerful address, Defence for Children International has urged the government of Sierra Leone to give directives to paramount chiefs and local authorities to regulate the practice of fostering and kingship in the country. This can save more girls from domestic and cross border trafficking in the country.

In January, 2021, the Sierra Leonean Embassy in Guinea, in collaboration with the Sierra Leonean Union, Conakry, identified two Sierra Leoneans girls victims of trafficking. The Embassy reported the issue to the Ministry of Gender and Children’s Affairs, who immediately contacted Defence for Children International to support the repatriation and reintegration of the two victims with their communities and families in Sierra Leone.
Further, DCI wasted no time and instantly visited the two girls in Conakry and traced their families in Sierra Leone. Interestingly, after swift response, on 4th February 2021, the Ambassador of Sierra Leone to Guinea, His Excellency Alimamy Bangura formally handed over the two victims to the Ministry of Gender and Children’s Affairs and Defence for Children International in Kambia district.
Meanwhile, the alleged perpetrator is in police custody helping the Family Support Unit with the investigation while “we are jointly working with the Ministry of Gender and Children’s Affairs to reunify the two victims with their families in Sierra Leone” Abdul Manaff Kemokai, Executive Director of DCI – Sierra Leone said.
Finally, many girls, particularly from rural communities in Sierra Leone live in exploitative conditions in Guinea as in other neighbouring countries and should be rescued. Thus, Defence for Children International is calling on the government of Sierra Leone to regulate the practice of kingship and other fostering of children in the country.

Media contact:
To learn more about the joint statement, please contact DCI-Sierra Leone at: info@dcisierraleone.org or by phone at: +232 88 818089.