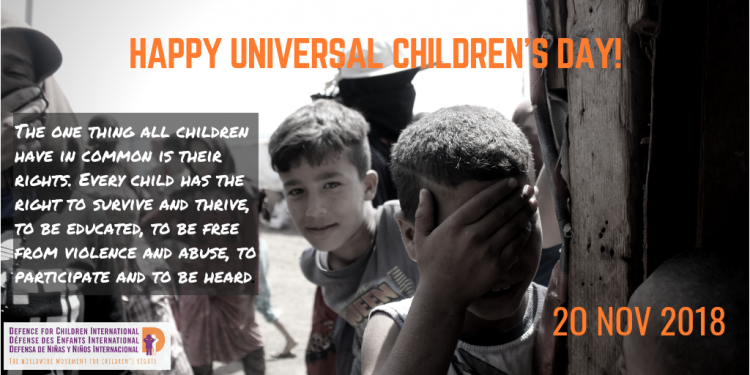 On the occasion of Universal Children’s Day celebrating the adoption of the United Nations Convention on the Rights of the Child (UNCRC), Defence for Children International (DCI) would like to share its vision for children’s rights in 2019. “2019 is an important year for children’s rights with the UNCRC turning 30”, said Mr. Alexandre Kamarotos, Executive Director of DCI-International Secretariat. “As a close partner of the UN Committee on the Rights of the Child during these last 30 years, DCI wants to share its outlook and goals in line with its Strategic Framework 2017-2021.”

DCI calls for a strong revision of General Comment 10 on children’s rights in juvenile justice by the UN Committee on the Rights of the Child namely reinforcing the best interests of the child, increasing the minimum age of criminal responsibility (MACR), and placing an increased emphasis on diversionary measures. DCI commits to increase and strengthen our work on Justice for Children in Europe, Latin America, sub-Saharan Africa, and the Middle East North Africa (MENA) through new regional projects including Regional Observatories and Socio Legal Defence Centres (SLDCs).

Prevention and Protection of Violence Against Children

In the reviewing of Goal 16 during the High-Level Political Forum (HLPF) 2019 on “Empowering people and ensuring inclusiveness and equality,” DCI would like to see sound progress by States on target 16.2 on abuse, exploitation, trafficking as well as all forms of violence and torture against children, including in the justice system. DCI pledges to strengthen its efforts through the creation of new Socio-Legal Defence Centres as a tool for promoting of the comprehensive protection of children, including ensuring systemic change and justice for children who are victims of violence.

Children on the Move

DCI welcomes the adoption of the Global Compact on Refugees and the Global Compact for Safe, Orderly and Regular Migration and supports their implementation with the goal of protecting the best interests of children within these processes. Furthermore, in 2019, DCI would like to see a return to a focus on the best interests of children in the context of migration including the wish to eliminate detention for migration-related reasons and separation of children from their families or guardians.

DCI advocates for a wider ratification and respect of the Optional Protocol to the UNCRC on the involvement of children in armed conflict. Several countries where DCI is present are directly affected by conflict – Yemen, Somalia, Iraq, Central African Republic, Colombia and Palestine, among others.  In 2019, DCI will continue concerted action at the national, regional and international levels to protect children affected by armed conflict, promote compliance with international humanitarian law and international legal standards, in particular concerning deprivation of liberty, reintegration and rehabilitation of children affected by armed conflict, and access to justice.

2019 is the year of the delivery of the UN Global Study on Children Deprived of Liberty! DCI, as co-convenor of the NGO Panel (composed of more than 160 NGOs),  looks forward to the delivery of the report and advocates for robust, systematic follow-up and for the identification of strong, non-custodial measures as well as a roadmap for systemic implementation that can be applied to address the unknown numbers of children deprived of their liberty worldwide.

Only 39 Member States are parties to the Third Optional Protocol to the UNCRC on a Communications Procedure which enables children to report violations of the Convention to the Committee. DCI calls upon other Member States to ratify the Optional Protocol. DCI also encourages cooperation amongst national, regional and international mechanisms and processes to expand and protect the rights of all children everywhere and let inclusiveness and child participation be the watchword within the child rights system. DCI supports the continuation of child participation and empowering children themselves at being Actors for Justice and Advocates for Rights.

DCI strives for a more comprehensive inclusion of a gender perspective in the work of the Committee on the Rights of the Child and in the Universal Periodic Review in its recommendations to States. This would reinforce the fight against gender-based violence and the economic inclusion of girls, who are disproportionately affected. DCI is committed to continuing the promotion of equality in gender, rights and opportunities for girls and young women in 10 countries namely in Asia and Africa through the “Girl’s Advocacy Alliance- GAA” – a 5-year programme which hosts participants from various active DCI National Sections.

Together with the 30th anniversary of the adoption on the UNCRC, 2019 marks the 40th anniversary of DCI: “A History of Taking Children’s Rights Forward and Bringing Justice to Children!” DCI was one the first international organisations to promote a child-rights based approach and was one of the drafters and advocates for the UNCRC, having coordinated the NGO inputs to the negotiations of the Convention. Today, with a comprehensive legal tool at hand codifying the rights of the child, we have much to celebrate but significant work remains to realize the rights of the child around the world. From January to December 2019, DCI will be organizing and co-organizing several events in all regions where the DCI Movement is present, as a way of paying a tribute to the work carried out by child rights defenders.

“DCI is looking forward to working with our partners to strengthen the protection and promotion of children’s rights protection in 2019, and wish everyone a Happy Universal Children’s Day 2018,” Mr. Kamarotos said.

For further information, please contact Paula Trujillo at paula.trujillo@defenceforchildren.org or by phone at +41(0)227340558