DCI-Burkina Faso was created in Burkina Faso in order to promote and defend children’s rights. Therefore, several actions are undertaken in the following priority issues:

In recent years, DCI-Burkina Faso has carried out inter alia the following projects:

DCI-Burkina Faso, together with school principals, established “Defenders of Children’s Rights Clubs” in fifty schools, colleges, and primary schools. These clubs serve as a relay to awareness raising actions and to the work of the National Section in schools. In primary schools, the national section raised awareness and trained teachers on Human Rights so they can incorporate the concept of children’s rights in their work. As such, DCI-Burkina Faso goes around primary schools once a month to answer questions from students, but also to talk with teachers about recurring violations of rights of children in the environment of the school, and on the issue of violence in schools.

DCI-Burkina Faso has began an initiative to help street children, below is a table representing their activities. 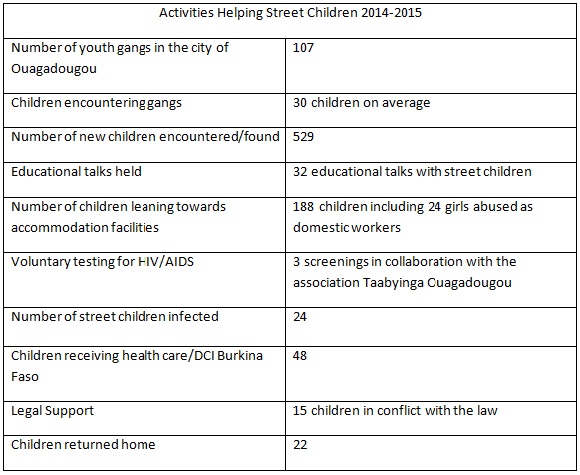 On 13 May 2014, the National Assembly of Burkina Faso adopted a draft law on the protection of children in conflict with the law, and on endangered children. The Burkinabe government is committed to the Convention on the Rights of the Child at both international and regional level. The State’s legislative framework however, remains inadequate as it fails to take into account all issues related to juvenile delinquency or endangered children. Furthermore, it is characterised by a lack of efficient procedural arrangements.

This deficiency of existing legislative provisions causes a number of problems. As indicated in the report of the Committee on General, Institutional and Human Rights Affairs, half of the Burkinabe population is aged between 0 and 18, according to 2006 statistics from the General Census of Population and Housing conducted. This situation calls for the government to consider carefully the legal and judicial treatment to this particularly vulnerable category of the population.

Thanks to many years of work by DCI Burkina Faso and other NGOs on the implementation and protection of children’s rights, the adopted bill is meant to update the current legislative framework, resolving institutional and procedural issues. It provides stakeholders responsible for child protection with a unique and comprehensive text, replacing the outdated law n°19-61 on juvenile justice that had not changed despite the signing and ratification of the two conventions mentioned above. This new legislative framework aims to improve the protection of children by making them benefit from rules and procedures appropriate for their age.